The Rise of Ponce City Market

You’ve probably visited — or at least heard about — Ponce City Market (PCM) in the historic Old Fourth Ward district of Atlanta; it’s one of the best-known mixed-use developments in the metro area. The shopping/dining/entertainment complex features modern, luxury apartments; a massive food hall with an impressive array of culinary options; a notable mix of retail choices; and office space inhabited by the likes of MailChimp and How Stuff Works. But did you know the building has a long, rich history dating back to 1925?

Originally constructed as a distribution center for Sears, Roebuck and Company, PCM was last used by the city’s public works departments and stored countless items inside its 2.1 million square feet of space. The building was largely unused for nearly 20 years before real estate developer Jamestown purchased the property in 2010. 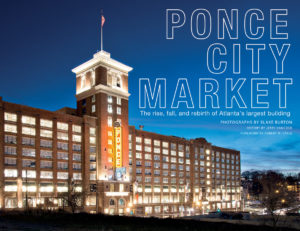 If you would like to learn more about PCM, and if you’re interested at all in architectural history, urban development or photography, then Blake Burton’s new book, “Ponce City Market: The Rise, Fall, and Rebirth of Atlanta’s Largest Building” is perfect for you. Through his book, Burton (an architect and photographer based in Atlanta) takes readers through nearly 200 architectural images that capture a massive structure in transition. With an essay by historian Jerry Hancock and a forward by architectural historian Robert M. Craig, “Ponce City Market” is a remarkable documentation of the six-year transition of a dilapidated building into the grand landmark it is today.